Skip to content Skip to navigation Skip to footer
Visit us
for a Tour!

Cottingham Retirement Community offers everything under one roof for independent lifestyles, assisted living, rehabilitation, long term care, and memory care. You’ll have peace of mind knowing that you will not have to move when your needs change.

Cottingham Retirement Community was established in 1984.  We are non-denominational and welcome those who are 65 years and older. There is no endowment fee, only a one-time community fee.  You’ll have everything you could dream of needing and people that care about you.

You will enjoy the abundance of activities, the countless socials, and the endless supply of friends!

Cottingham Retirement Community is conveniently located within minutes of several major freeways- I-275, I-75, and I-71. We are located in a thriving metropolitan area that offers many resources close by such as: shopping malls, Horseshoe Casino, Taft Theater, beautiful parks, activities and dining on the Ohio Riverfront, The Great American Ballpark-home to the Cincinnati Reds, and more. You might be tempted to sneak out at night for a few laughs!

Cottingham rates are very affordable; you might say we are the best kept secret in town! There is a one-time minor community fee then your monthly rent. Expenses at a retirement community encompass everything you need and can possibly be less than your current home expenses once you do the math. Utilities, phone, cable TV, weekly housekeeping, and weekly linen changes are included. You won’t find those perks at home!  Please contact our retirement counselor for more information, email, or call us.

Please contact our Marketing Director for more information at 513-563-3600.

We take pride in our Veterans and sharing their stories. “The Avenue” is a long hallway filled with photos and memorabilia we have dedicated to remembering them. We are happy to share this video featuring Sgt. Raymond Arnett, one of our beloved residents. 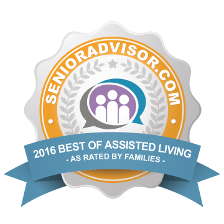 The annual SeniorAdvisor.com Best of 2018 Awards recognize outstanding senior living and home care providers who have received consistently high ratings from residents and their families.

Winners of the SeniorAdvisor.com Best of Awards are located all over the country and represent the top tier of in-home care, assisted living, and other senior living providers in the country.

The award places winners in the top one percent of senior care providers nationwide! Shelaugh is excited to join the Cottingham Family! She was born and raised in Cincinnati, the youngest of nine children. Shelaugh and her husband, and their two children have lived in the Sharonville community for the past 17 years. She has previous experience in another retirement community and loves to interact with the residents and their families. If you need help making the decision to move to a retirement community, or you are interested in making Cottingham your home, Shelaugh would be happy to speak to you about the benefits of Cottingham. You can contact Shelaugh at 513-563-3881 or email her at sobryan@cottinghamrc.org Meet some of our Team! Shelley grew up in Sharonville and attended Princeton High School.  She went to Eastern Kentucky University and graduated with a Bachelor’s degree in Sociology.  She received her Administrator’s license in 1992.   Shelley has worked as Administrator of Mason Health Care Center in Mason (our sister community) and the Administrator of Ivy Court at Cottingham.  Shelley welcomes, enjoys, and learns from the opportunity to serve our residents.  She understands the needs of the residents and strives to make Cottingham feel like home.

Shelley lives in Mason and has a cat named Daisy. She loves to read, cook and bake.  Upscale craft shows is a favorite past time!  Shelley recently started walking in 5k’s and has completed two with another one coming up!

Thank you for your interest in becoming a part of the Cottingham team.

Responsible for direct care of residents – requires documentation of care provided throughout a 24 hour period.

60 – Bed Unit
Non Profit
Responsible for direct care of Residents, including medicine, treatments and oversight of STNA delivery
Documentation of care provided throughout a 24 hour period

Strong documentation skills; experience with Point Click Care (PCC) is a plus
Ability to follow instructions and work well in a team environment
Self directed and work well under minimal supervision
Follow through personality with attention to detail
Communicate effectively with residents and other staff members

If you are available at least one day a week and every other weekend,  we have an opportunity for you.

Additional hours are available on the weekends.

If you are available at least one day a week and every other weekend,

we have an opportunity for you.